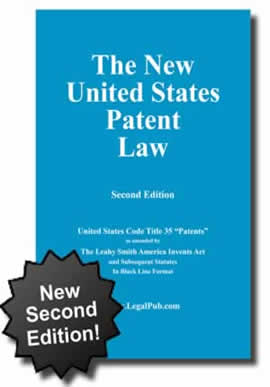 The New Second Edition builds on the First Edition. Like the First Edition, the Second Edition shows, in black line format, the changes to Title 35 resulting from the AIA. However, the Second Edition has been updated to show the changes effected by more recent legislation — the Patent Law Treaties Implementation Act of 2012, P.L. 112-211 (“PLTIA”) and the Leahy-Smith America Invents Technical Corrections Act of 2013, P.L. 112-274 (“TCA”). The PLTIA and TCA together made over 130 changes to the U.S. Patent law, many of which are significant.

Each of the three statutes has a provision setting forth the date on which the statute is to take effect and the scope of its applicability. Each statute also has numerous exceptions. These general “effective date” and “applicability” provisions and many of the exceptions are summarized in an extensive six page Table.

This is an invaluable tool for understanding the new patent regime. It is an essential reference for every practicing patent attorney, patent agent or business involved with the US patent system. Contents include:

Volume discounts available on all books! Save when you order in bulk. LEARN MORE »